Passed Some Exams, But No Rest for the Questionably Benevolent 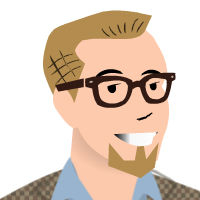 Slowhand MCSE: Cloud Platform and Infrastructure, MCSA: Windows Server 2003/2012/2016, CCNA Routing & SwitchiBay Area, CaliforniaMod Posts: 5,163 Mod
August 2016 in MCTS / MCITP on Windows 2008 General
It's been a busy year for me. A lot of overtime at work, a lot of family and friends coming and going, so it's been tough to squeeze in time to study. I should have posted here sooner, but the time just keeps on slippin', slippin'. In any case, here's what your favorite Windows Moderator has been up to lately:

On July 30th, I finally nailed down my MCSA: Windows Server 2008. This has been a LOOONG time coming for me, mainly because I'd start to study for an exam and then life would drop a ton of bricks on my head and I'd have to stop for way too long. This went on and on since, oh, about 2009. So, this year, I finally decided it was time to get it done. It was also nice to have it knocked out before they announced the retirement date.

March 12th, 2016: 70-640 - Active Directory, Configuration
I spent about two months solid, an hour or two every day after work, four or five days a week. A lot of my work involves AD, but I rarely touch AD Certificate Services, I never do anything involving Lightweight Directory Services, Federation Services, or Rights Management Services. The most challenging areas for me were definitely AD CS, Trusts, Business Continuity, Disaster Recovery, and Federated Services. Don't underestimate the "simple stuff", like GPO processing, managing groups, etc., that stuff can most definitely trip you up if you're not thinking your way through the problems.

July 22nd, 2016: 70-642 - Network Infrastructure, Configuration
This was a much, MUCH easier exam than the AD test. The topics are smaller in scope, a lot of this stuff are things that a Windows admin might see on a day-to-day basis at work, even when starting out in the industry. I had plenty of knowledge of IPv4, subnetting, routing, NAT, RADIUS, and routing protocols from my CCNA days, so I felt pretty confident there. Had to brush up on IPv6, though, as well as Microsoft-specific things on networking, like the security features they include in RIPv2, for example. There's a lot to cover in the areas of DNS and DHCP, as well as with things like NAP and IPSec, so I really had to flex my brain on topics that seemed "simple" in comparison to the previous exam, but in the end having a lot of practice and general knowledge helped. Working with files and file-sharing was a blast from the past, definitely, but I got a LOT out of learning about DFS and DFS-R, which encompass a huge topic that probably deserves more than one section of one chapter in the Microsoft Press book. In total, I spent about three weeks preparing for this exam, starting at the beginning of July; I'd gotten side-tracked after the 70-640 with a lot of work, as well as a bunch of VMware stuff.

July 30th, 2016: 70-646 - Microsoft Certified Solutions Associate
This was a big, BIG throwback to my ITIL Foundations journey in terms of tone and approach. This exam tests your knowledge of where, when, and why you would want to use a particular solution, not the technical details of how. I'd been reading the 70-646 book on and off in the interim between the last two exams, so putting my nose to the grindstone and knocking out this test eight days after the infrastructure exam was doable. (My decade or so in IT also helps.) I feel as if though, if you studied the other two exams thoroughly, *really* nailing down the concepts, you could probably do well on this test without any real preparation. There are some topics, though, that go into 70-643 territory, like Hyper-V, so I did have to do some extra reading on that, but luckily I've dealt with some of the additional extra topics at work. The biggest thing about the exam was making sure I read the questions through, really understanding what they were asking, since it was really easy to miss some little detail and get a completely different idea in my head of what the scenario was the first time around.

For all three exams, I used the same basic material: an MS Press book, a CBT Nuggets course, and then some additional labbing and information from TechNet, courtesy of the exam blueprints now featuring links directly to pages about the listed topics. For labbing-purposes, I used VMware Workstation and a couple of copies of Windows Server 2008 R2 180-Day Evaluation. Nothing too fancy, at any given time I was running 2 or 3 virtual servers, and on rare occasions, a Windows 7 VM.

What's Next
On the horizon, I've got my VCP550 exam coming up in early September, (I took the class a while back, so I might as well buckle down and knock out the cert, considering I do manage a vSphere infrastructure at work.) I plan on hitting the books hard for the upgrade exam (70-417) to MCSA Windows Server 2012 after that, giving myself about four to six weeks to really nail everything down all over again. (I've got the Sybex Complete Study Guide staring me down as I write this.) I've also got the beta exam for MCSA Windows Server 2016 set for the end of October, so hopefully I'll go from lagging sorely behind for years to plunging RIGHT into the newest, shiniest version of Windows before it's time to put on that Halloween costume. (I could just jump straight from 2008 to 2016, but I want to make sure I have the 2012 skills down, as well as the cert to show for it, after all these years.)

Beyond that, I will eventually get myself up to VCP6-DCV (or 7, depending on when it is,) and look into the MCSE: Server Infrastructure. I've also found myself working quite a bit with Azure, AWS, and SCCM lately, so there might be some DevOps training in my future. I keep finding myself drawn towards the MCSD: Azure Solutions Architect, but work-responsibilities might also have me running for AWS: CSA as well. Hopefully, by this time next year, I'll have a lot of these squared away and will be launching my career in the direction of more cloud-oriented work. I'm also going back to hitting the math and compsci books, school's a-beckoning for me, probably within the next few years, but I gotta save up the money and secure my career before that can happen. The one saving grace in all this: I've managed to get myself back in the gym on a regular basis, which is a great way to break up the tedium of sitting in front of a monitor studying all evening, and I've cleaned up my diet to the point where I'm not getting all bloated up on soda and junk food. I never imagined how much my level of physical fitness could aid and assist in keeping my mind sharp and clear for studying, but it's definitely been a great way to balance it all out.
Twitter | LinkIn
Free Microsoft Training: Microsoft Learn
Free PowerShell Resources: Top PowerShell Blogs
Free DevOps/Azure Resources: Visual Studio Dev Essentials