Fulcrum45 Member Posts: 619 ■■■■■□□□□□
July 2019 in CCNA & CCENT
OK, so this might not be a CCNA question necessarily but I can't think of another place to post this. Plus I'm so used to Cisco terminology that I'm struggling to get my head around Tagged and Untagged ports. More particularly, how Tagged ports respond to untagged traffic coming in. I currently have this setup as we speak and it works. But I have a sneaking suspicion something it isn't right.

How would Switch  B's trunk handle an untagged frame from a different VLAN?

NOTE The trunk port on  Switch B has it's PVID set to 35 and PVID on Switch A's trunk port is set to 1. 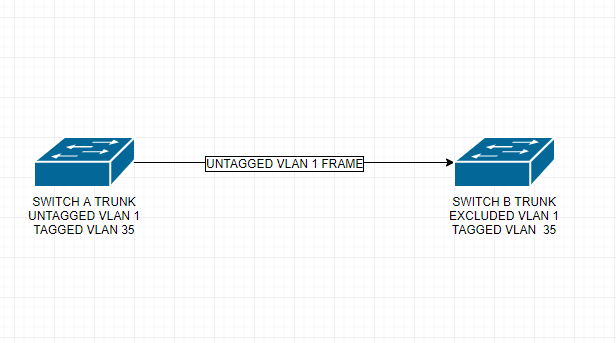 In the Cisco world I would just only allow the VLANs I needed across the trunk ports but every other vendor doesn't seem (to me, at least) make this very obvious.
Anyway, if someone could shed a little light on this for me I would appreciate it.
5 · Share on FacebookShare on Twitter